If you feel like indulging in an amazing, sweet, delicious and caloric breakfast this recipe is for you! Now I took the shortcut here and didn’t actually make the cinnamon buns since I live a block away from “Grounds for Coffee” which apparently has some of Vancouver’s best cinnamon buns, so I had to try them (they were delish!).

The idea of this breakfast was brought to my attention by my girlfriend Megan, who used to order this at Moxie’s years ago until they got rid of the recipe. So after lamenting about this amazing dish, we had to make it!

Since we took the cheater method, this was a very easy dish to prepare. Combine and mix all the ingredients together (minus the cinnamon buns) and cut each cinnamon bun in half. Soak each side of the cinnamon bun in the mixture for about 10-20 seconds until it has absorbed a good amount of the mixture. Once you have soaked all the cinnamon buns, put a tablespoon of butter in a pan on medium and once it evenly heated cook the cinnamon buns until golden brown on each side (about 4-6 minutes on each side). Once I brown one side, I flipped the cinnamon buns onto a plate, put another tablespoon of butter in the pan, spread it around and flipped them back into the pan. Now if you have a real sweet tooth, feel free to make a batch of whipping cream to top off all those delicious cinnamon bun french toasts. Combine the cream and sugar and whisk or blend until you get stiff peaks, put it in a Ziploc bag, cut off the corner and top the french toast.

The next time I make cinnamon bun french toast I think I will be making it with combing a cinnamon bun recipe with the french toast recipe and baking it all together in the oven! But these were delish! They had a crunchy exterior with a soft inside and plenty of cinnamon bun AND french toast flavour, can’t really go wrong with that! 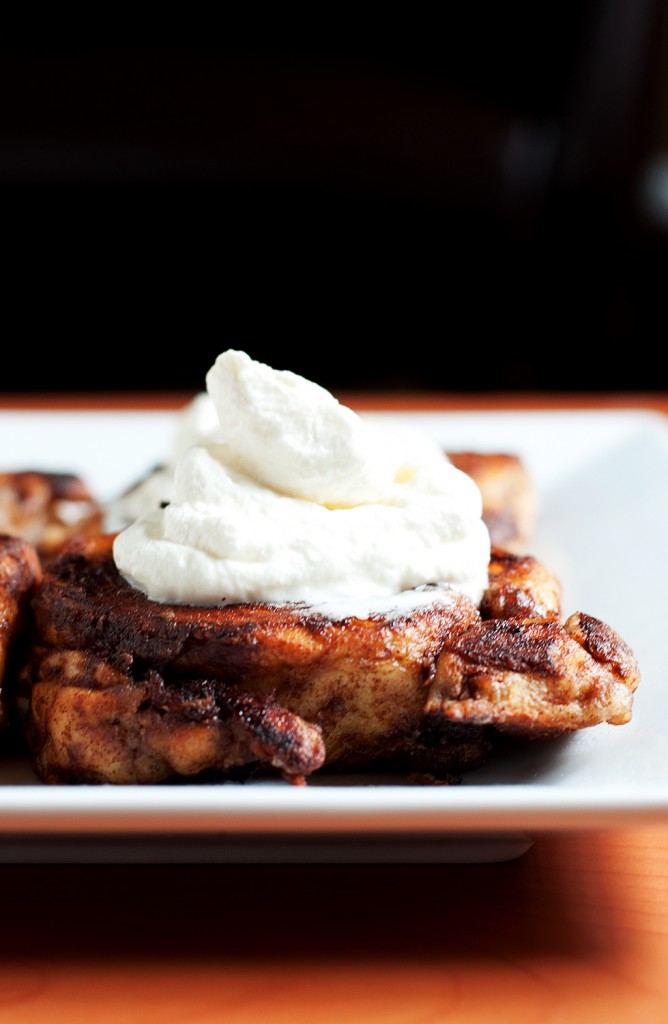 If anyone has tried making cinnamon bun french toast in the oven, send your recipes my way, i’d love to try it!